The edges of England awash with water 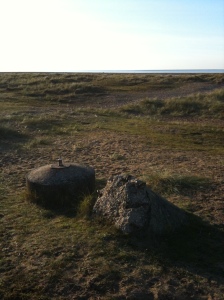 Travel into East Anglia my friends and the world suddenly feels less certain. The sky, whether blue or grey, reduces your size to a pinprick on this orb and the land is flat and unremitting.

We are nothing in this landscape and churches pray to heaven lest, one day, the sky should fall in and we are crushed by a firmament of stars. Thus it was I found myself once again in Norfolk; Le Gringalet had brought me to new pastures: the flat beaches of the Wash where (I recall) King John had a lucky escape not so long ago.

What was most strange is that my visit to these marshlands was almost 795 year to the day when the king fell ill and instructed his baggage train to cross the Welland estuary at Fosdyke. I am sorry to say that as well as losing his baggage he also subsequently died of his illness himself, at Newark-on-Trent on the 19th October 1216. Little wonder that these lands, at times, make you wonder when the world will stop for you…

And that’s because the land here moves, like a swamp snake. Clearly, since they were drained from the 1400s (and most dramatically from the seventeenth century onwards) both the land and the waters have changed much since when I first ventured here. Indeed, the marshy reed-land of the Fens has largely disappeared now but, imperceptibly, this soil is alive beneath its calm surface and I have no doubt that when man stops thinking, the world will move again and those waters will rise…

And the waters, whether flowing here or not, have created a strange, melancholy aloofness among the denizens of the Wash. People here could hide for years and never be found at one time and well I recall some local folk wandering around on stilts from place to place. Little surprise – the reeds revealed nothing: staunch guardians of dark secrets, home to the booming bittern and nasty ends in dark pools.

Travelling here too was a leap of faith in those days. Navigation beyond the road to Lynn was very much one of following your horse’s nose. For the traveller heading north, once the isle of Ely was behind you, the horizon was but a sea of reeds, your only hope to turn back and use the great lantern of Ely cathedral as your guide; ever taking you back to God – or at least you hoped.

And in those reeds, then as now, the people – water-crinkled by nature – were sullen folk, proudly independent and tending their lands in summer, surrendering to the floods as they rose in winter months. Black and dangerous were these lands when John last rode this way. And as the anonymous “Fen Parson” was to write in the 1770s:

agues and coughs are epidemical;

Hence every face presented to our view

Looks of a pallid or a sallow hue

So that was then but what of today? Lest you journey to Wicken Fen, reader, there is little left to tell the story of this landscape of rustling and silence. But in its place comes still a flatness and a threatening calm. In place of the stiltmen you have the sugar beet lorry, wending its lonely path up clogged arterial roads. In place of the rustling reeds you have the endless horizons. In place of the marshes, you have the brown murk of the Wash – only navigable by the Lynn river among the dangerous sandbanks.

Yet it’s on the beaches of the Wash that, perhaps, nothing has changed and this is where threat of this brooding place still breathes roughly. At the mouth of the Wash by Holme-Next-The-Sea, walking beyond the village and over the dunes, the salt marshes and lowlands are just as I remember them, just as they have always been.

Look along these beaches and touch the sheer futility of the concrete mounts for spigot mortars – a last hopeless line of defence against German invaders; now forlorn and forgotten in the sands. And then look behind the dunes to the village beyond. It is lonely, quiet and flag-less, in the autumn evenings, flickering lights are turned on in living rooms just as serfs gathered in hovels in my time: their company sole comfort against the uncertainty of the unknown.

Holme-Next-The-Sea hides behind the dunes but it does so on borrowed time. It lies on land which appears lower than the sea beyond the dunes. These lands are beyond the Fens but not beyond the power of water. Water, like the dunes of the Sahara, waits and moves imperceptibly. One day soon these waters will rise again and England will lose yet more treasure to the Wash.

As the Fen Parson writes of the life of man in these places: “His varied scenes of life, now make him see, Nothing is certain but uncertainty“.

Reader, though times have changed, some things forever remain the same.

Facing an uncertain future: spigot mortars watch the sea for an enemy which never came – but will the waters take what the Germans could not?