The much damaged remains of the tomb of Sir Walter Atte Lea, who helped in calming the Peasants’ Revolt of 1381

And so we went riding through dark woods and groves,

Gringolet and myself going slow down wind-ways,

Till we came unto Albury set high on its hill

With eyes over Hertfordshire at sweet summer tide

In a bier by a window beside a bright light

That shines upon him and his wife lying there.

What now he whispers I wish I could hear

But all of his voice has gone blown with the barley

Along with the words that he spoke long ago

To Richard the boy king who ruled with weak reason

When peasants in Essex and Suffolk and Kent

Did rise up against those grasping greedy for tax!

Walter wanted to walk with his own peasants there

To tackle them himself and not to allow

Central courts to oppress them and cause much contempt

When he had to live there and treat with his men

And help rule his lands without disloyal folk.

Repression he argued had gone way too far

He talked with his men there

Who knew his local law

Walter saw what was right fair

In talking with the rural poor.

The Church of St Mary at Albury in Hertfordshire contains a variety of monuments and brasses to attract the casual visitor. The tomb of Sir Walter atte Lea, referred to in this post, is now sadly much defaced and has also been moved at some time in the past. Sir Walter atte Lea (also known as Sir Walter atte Lee) himself played a key role during the Peasants’ Revolt of 1381, attempting to deal with complaints locally rather than to impose harsher penalties from a distant monarchy. He appears to have handled the matter incompetently although this did not stop his further advancement under Richard II, as this link reveals. The location of the church, atop a hill surveying much of the surrounding countryside, means it commands attractive views over the east Hertfordshire uplands.

New Book by the Author: Michael Smith’s new translation of Sir Gawain and the Green Knight will be published in July 2018. To pre-order your special collector’s limited first edition – with your name in the back – please click here

The much damaged remains of the tomb of Sir Walter Atte Lea, who helped in calming the Peasants’ Revolt of 1381

The much defaced tomb of Sir Walter atte Lea and his wife Margaret at Albury Church, Hertfordshire 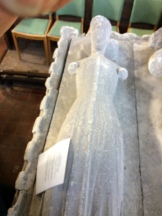 Much defaced tomb of lady Margaret, wife of Sir Walter atte Lea, at Albury in Hertfordshire

Albury Church, Hertfordshire, where can be found the tomb of Sir Walter atte Lea. Gringolet rests just outside the door.

Bascinet detail of Sir Walter atte Lea from his tomb at the church in Albury, Hertfordshire. Sadly much defaced. 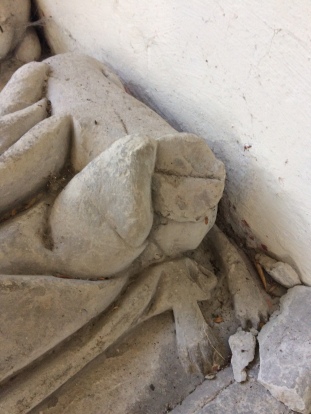 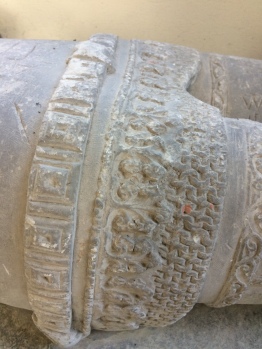 Exquisite detailing of belt and upper leg armour of Sir Walter atte Lea, from his tomb at Albury in Hertfordshire 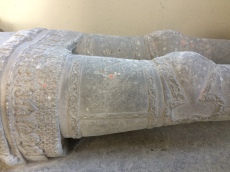 Detail of the leg armour of Sir Walter atte Lea from his tomb at Albury in Hertfordshire. Notice the decorated banding which most probably would have been finished in polished brass. 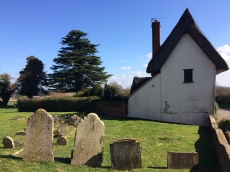 The graveyard at Albury church in Hertfordshire. Note the house, itself of some vintage, and compare it with the Griggs drawing shown elsewhere in this post.

The mediaeval graffiti at Anstey, Hertfordshire

Through the door: the ancient doorway to an older church at Anstey

Ah reader, when you point an old mare like Le Gringalet at an ancient road of the type which criss-crosses Hertfordshire, you are always sure to find a quiet surprise. And no more so than at the quiet village of Anstey in the north of the county. Well, a village now but in my time…

Sheltering below the great mound of the castle is a quite wonderful church. Here, as my anonymous friend wrote in his beautiful poem Pearl, we find something, “sette sengeley in synglere” (always one for the words, my Staffordshire friend!).  Here at Anstey, we have the silent graffiti of long lost souls.

Of course, I knew him well whose hand turned point to stone – but to inform you who inscribed these scratchings would be telling. I don’t want to get them into trouble with the priest: the last person who was caught ended up losing his hand – hardly a fitting end for a friend talking to the future! And besides, Nicolas de Anstie lost a lot more when he sided against King John so I think it’s best to keep quiet on these matters…

Through the door: the ancient doorway to an older church at Anstey

The Font at Anstey – Mermen make a rare appearance

So instead, dear reader, I’d just like to affect an introduction to what I see as some of our scribe’s more exquisite creations… Look around and you see some treasures of my age, perhaps the finest of which are some wonderful jousting helms carved into the pillar near the centre of the church.

While these helms may be unfamiliar to you, I can recall well the merry jousters who once played for sport on the fields outside this church – royally entertained by Sir Nicolas himself.

But these shields are somewhat newer – I would say perhaps around 1300. Look closely and you see no idle scratch but the work of someone who knows what he studies: the breathing holes on the helm face, the continental crest with its horse and reins, the flowing decoration to the rear.

If I’m not mistaken, one crest resembles the ragged staff of the Earls of Warwick but without the bear: I don’t recall the knights in question but perhaps he is one of the Balliol family – a long way from home if he is!

Elsewhere, there are scallops – the sign of pilgrims – and pleas for help from Our Lady.And look further, scattered around are wagons, merchants in padded clothes, a three-legged pot – and a curious inscription near the beautiful font with its mermen. Alas, since last I was this way someone has “restored” the church and painted over this writing – it is difficult to decipher now.

But these changes succeeded in preserving the best. Yes, I know the delightful wall paintings I once knew are long gone save for a few remains, but Anstey is a special place. Reader, should you need some time for quiet reflection, come upon Anstey on a lazy day and share its cool shade. You will be richly rewarded with a mirror onto a distant age.