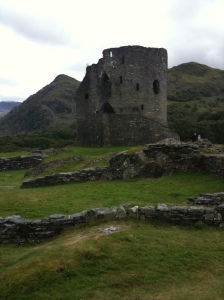 Dolbadarn Caslte, Gwynedd - a statement in the Welsh mountains

What is it about Wales, dear reader, that conjures in the mind the mysteries of medieaval Britain? Is it the fact that it is bound from Prestatyn to Chepstow by that great dyke of King Offa of the Saxons – sealing it off from England like a great curtain of earth across the marches? Is it the looming mountains shrowded in mists and rain which evoke a land almost beyond the land – a  true Valhalla for the scented isle of Albion? Or is it the dark secrets and stories which my old friend Geraldus Cambrensis liked to tell over the fires at night time?

Whatever the reason, Wales was – and is – a land of magical beauty, and a land where my blood still runs and where my head turns in search of the true Britain which I seek and pray for in my travels. Here, on le Gringalet, I chose to visit again the very land which perhaps defines what scholars have called the Matter of Britain and, perhaps, the ultimate legendary home of my true king, Arthur – King of the Britons.

And so it was, after much travelling, that I arrived at the halls of Dolbadarn once again. Here is a favourite place of mine – its tower standing proudly and yet minutely against the backdrop of its cold black, old black slate and grey mountains. Here the harp plays in the secret fastness of the hills. And there, a raven-headed girl flashes blue eyes at me over the fire side as she sings the stories of the Mabinogion…

The last time I was down this way, the only view of Dolbadarn I saw was through the slit of my visor. These were troubled lands in troubled times: Edward Longshanks had builded such a wall around the north of Wales that few could prize themselves from its iron grip. To the west, Caernarfon, Beaumaris, Harlech and even Cricieth. To the north, Conwy, Rhuddlan and Fflint. To the east, Chirk and Builth. To the south, Aberystwyth.

The fingers of that great lord tightened stone by stone and the long days of Llewelyn ap Gruffydd – seen by many as the last true Prince of Wales – were coming to an end. At Orewen Bridge, alas, he died a lonely and somewhat ignominious death at the hands of Stephen of Frankton, a low-ranking knight (and not of my acquaintance).

But let us not dwell too harshly on those days – it repays us not to boil resentment in a cauldron long since cooked dry. Instead, let us see what still remains in majesty to look down upon the great pass of Llanberis: the great tower of Dolbadarn, built by Llewelyn Fawr, Llewelyn the Great.

In true form, of course, Dolbadarn is a classic castle of the Welsh. It is not sophisticated, indeed it is somewhat crude and yet, like many of the great English castles set within their landscape, this is a castle of statement. Unlike Ewloe, strangely hidden in the woods near Chester, Dolbadarn is unafraid.

In my time, I remember well this compact castle and the cluster of huts and houses around its base. Alas, like the captains and the kings, the princes and their lovers, they have long gone but the tower still remains – enough so in my mind to see it as once it was. The steps leading up to its entrance have changed but once at the entrance it still makes me smile to see provision for a portcullis. Clearly, what the Welsh may have lacked in money they made up for in craft and were still capable – as at Dinas Bran – of adding complex features to even the simplest of buildings.

I scale the steps which once led to a most exquiste bedroom but alas now only birds and insects flit around where once we sat and exchanged stories in the quietness. There is no roof now, no floors, no drapery, no plaster. Dolbadarn is but a shell and yet, and yet. Visit this place on a quiet day, ascend the steps of the tower and listen…

Listen to poetry sung in ancient Welsh. Listen to the poets’ voices as they whisper adventure, love and many things. Think now of the words of Iolo Goch as he described the castle of Sycharth, home of Owain Glyn Dwr, seen by some as the very last prince of Wales:

There are joists upon the hillside

As in a vault, side by side,

And each one, in a tight-knit

Pattern, to the next is knit

Twice nine dwellings to look up

To a wood fort on a hill top.

Next to heaven his court towers

A loft tops all, built carefully,

With all four rooms for friendship

Joined as one, where minstrels sleep…

Dolbadarn, a ruin now, still sings its song to all who care to listen when they venture up the Llanberis Pass in search of beauty now instead of war. While its outer walls are but mere foundations, its tower is like a siren song for all in search of simple, yet profound, majesty.

Note: For modern travellers, the remains of Dolbadarn are now managed by Cadw. Be prepared for some steep car-parking charges (fees charged by the day to cater for hill walkers) at a large car park just below the castle. I believe the original castle car park is still open where you can park just to visit the castle itself.

SEE INSIDE DOLBADARN: Follow this link from author Owen Law who is writing his first novel: follow his links to his You Tube video of the keep’s stark interior!