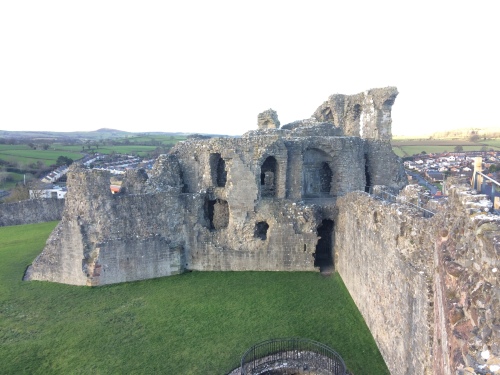 In Denbighshire, atop its hill,     Denbigh castle dreams

Of the borough it once knew     that bustled brightly there;

But now it seems that all has gone    save ghosts of places known.

Here was a town de Lacy made     in lordship over Clwyd

By walling first an ancient site     and crowning it with towers;

What majesty was made right here –     what mighty monument –

Here stands a coronet of stone     clustered thick with jewels:

A noble king sits richly here     above the gatehouse strong;

Great towers three gang up at once     in grandiose assertion

Yet, look upon the hall that hailed     with voices of that household,

See too the well-made mantlet,     laid out in form majestic;

And listen now for those I knew     who have since rode away!

Yes, all now sleeps of those my friends     who spoke and sang with me,

In centuries of silence soft,     just whispers on the breeze.

There is a sadness here also     that speaks of deeper loss –

De Lacy’s son, cries from below    where he once slipped right down,

To force-feed his lungs    with that foul water lapping in

What stories can you tell?

Why do your walls and crumbled towers

Cast such a haunting spell?

The castle at Denbigh/Dinbych and its adjoining borough occupy a wilfully assertive position in the landscape. Originally the site of an earlier Welsh stronghold and administrative centre, the castle and borough walls were erected in the final two decades of the thirteenth century by Henry de Lacy and occupied an area of approximately 9 1/2 acres.

The town walls were erected first, enclosing not only the town but also forming two sides of the castle’s curtain walls. These lower walls were to be further protected by the creation of an outer walled earthwork or mantlet, in addition to a sophisticated postern gate and sallyport. The walls facing the town are of a greater size and were clearly designed to impress: the three-towered gatehouse, with its striking internal defences and mounted with a figure thought to represent Edward II, still impresses despite the site’s ruinous condition.

The castle was still unfinished when Madog ap Llewelyn took it by storm in September 1294. Recaptured by de Lacy the following year, the castle continued to be developed although it is thought that it was never fully completed, possibly due to the death of Henry’s eldest son. The town and castle were also attacked during Glyndwr’s rebellion and the Wars of the Roses.

The borough of Denbigh was to outgrow its original walls and migrate downhill; the castle itself was slighted under orders of General George Monck following the position the borough took as a Royalist stronghold during the Civil War. Despite the devastation wrought by Monck, there is still much to be enjoyed at the castle in addition to the town walls, some of which can still be accessed.

The view from the castle of the great bowl of landscape within which it stands give a dramatic impression of the stance the town and borough must have held within the landscape before the town’s expansion.

The castle today is managed by Cadw; details here